When you get a series of support requests where the recipients of the support reply something like “thanks, but that’s quite tedious to script”, you realise you need to show someone a better way. For each of these support requests, we provided a solution using a function or subroutine that brought a reply which was more like “hey, that’s fantastic, that’s so easy”. So, in this blog article, we are going to look at writing your own reusable functions and subroutines so that you can improve your productivity. 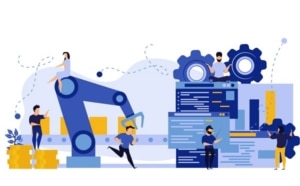 When do functions and subroutines help?

Like a lot of the tools in MRDCL, the productivity features come into play when you are either trying to script something complex or something that is, perhaps, quite easy, but which is laborious to prepare. This blog article is going to give some practical examples of how laborious tasks can be simplified by building functions and subroutines that can be re-used either within the same project or within any number of projects – and, even, shared with colleagues.

What are functions and subroutines?

Functions and subroutines allow you to pass parameters to a fixed piece of script so that MRDCL generates whatever you need. Now, that sounds complicated, but what it means is that if you have something similar to something else that you have scripted, you can tell MRDCL what is different on the second and subsequent occasions without re-scripting the whole thing again. You can do this by passing parameters (or the differences) to the function or subroutine.

Let’s look at a simple example

Let’s say that you have a numeric field which stores the number of cans consumed of various soft drinks. Let’s also imagine that 999 denotes that the respondent doesn’t know how many cans have been consumed rather than 999 meaning that they drunk 999 cans! We could enter code something like this:

Using a function instead of writing repetitive code

Now, in fact, for this example, we could have written a simple *DO loop as there is a pattern to the variable names (brand1, brand2, brand3) and the data locations (12-14, 15-17, 18-20). But, let’s use a function by passing parameters. Let’s pass the variable name, the start data location and the text for the brand to the function. We can do this in a data statement.

Our script now could appear as:

This function would produce the same code as above. In other words:

The example above is quite a simple one and not especially time-saving, but let’s look into some examples where there are real productivity gains. One example might be where you want a top-two box and a bottom two box generated. The script isn’t especially difficult but takes time to prepare. Let’s say we have a variable called q2, and we want a top-two box and a bottom-two box added in a variable called q2_t2b2. The parameter that is needed and the function might like this:

You could extend the function so that you could choose whether the top-two box and the bottom-two box came first, at the end or in some other way. You could set a numeric parameter which indicated what you wanted. For example, 1=put at the end, 2=put at the top. Your function would then need another parameter, and your script would need to be conditional on the setting of that extra parameter. For example,

The file top2bot2.stp would need to be extended to deal with each option:

Fewer errors, easier to use

There is no limit to the number of parameters you can set in this way and pass to a function, and the real benefit is that you are more likely to generate error-free script.

Less known in MRDCL is the ability to write functions. They work on the same principles but must appear before their use in the script. Subroutines begin with a *SBDEF statement and end with [*SBEND] For example, you could define a subroutine like this:

! this subroutine has been called [RepeatCalls] times

This would produce the following script:

! this subroutine has been called 1 times

! this subroutine has been called 2 times

You can not only pass values to a subroutine, but you can also pass *DATA statement lists and EPS files or worksheets.

Save time, save money

This example is undoubtedly more complex and needs more advanced knowledge to use, but the examples hopefully illustrate what is possible and how you can avoid writing the same code over and over again.

If you need help with producing a function or subroutine, please ask us for assistance. We do undertake the writing of custom functions if you wish us to provide a commercial service.

How to handle multiple runs in MRDCL using batch files

How to analyse and report on a tracking study